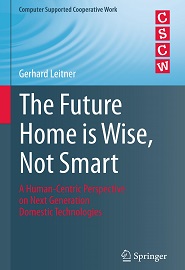 This book introduces the concept of the wise home. Whilst smart homes focus on automation technologies, forcing users to deal with complex and incomprehensible control and programming procedures, the wise home is different. By going beyond intelligence (or smartness) the wise home puts technology in the background and supports explicit (enhanced user-experience) as well as implicit (artificial intelligence) interaction adequate to the end-user’s needs.
The theoretical basis of the wise home is explored and examples for its application for future living are presented based on empirical studies and field work carried out by the author. Principles of HCI and the meaning of the home from differing scientific perspective are discussed and a research model (based on the concept of user experience (UX)) and iterations is introduced. This has resulted in field deployment guides being produced through a systematic development process.
The Future Home is Wise, not Smart will be essential reading to home system developers, designers and researchers, responsible for smart home deployment or Ambient Assisted Living (AAL) who will get insights on how to follow a novel approach in developing and adapting smart home systems to their users’ needs. Students with an interest in software design for pervasive systems will benefit by receiving information on how to develop and customise systems for the specific needs of living environments.

The reason the new paradigm is labelled WISE and not, for example, smart 2.0, is to clearly convey a difference to the “Man conforms” philosophy which is based on the self-conception that people would have to adapt to the features the technology offers. The result is depicted in Fig. 1.1 – humans imprisoned by the technology.
Human computer interaction, which is one of the theoretical foundations of this book, proposes the evidently more appropriate approach of adapting technology to human capabilities. But as pointed out in the preface, HCI seems to have disappeared from the focus of attention. Introducing the new paradigm should contribute to re-gaining the attention again HCI deserves.

As an analogy to human development, where wisdom is considered a stage beyond intelligence, WISE aims at going beyond smart; overcoming the shortcomings of current smart technology as impetus for further research and development. The WISE approach is built upon the characteristics of human wisdom, and as defined.

The WISE Approach: From Sweet and Smart to WISE

A Focused Survey on Technology: From Hypocaust to Smart Appliances

After the pioneer phase, the home automation market also experienced some diversification. Over the last decades a separation between automation technologies for industrial and public functional buildings on the one hand and the residential building sector on the other, is observable. In the functional building sector, wired solutions have been successfully adopted. Consider, for example KNX, which enables the integration of components from different manufacturers and offers a high functional range. However, the complexity of system architectures, the pricing and maintenance models have, so far, impeded broad dissemination on the private consumer market.

In the private consumer market, wireless solutions constitute the majority. The following enumeration is consciously not taking into account those smart systems that originate from other sectors, but focusses on operational technologies, as labelled them, approaching smartness from basic components and functionality. But even the variety of systems in this segment seems to be incomprehensible.

A simple web search1 reveals systems from Belkin, Xavax, EQ-3, AVM, RWE, Allnet, D-Link, Coco, Edimax, eSaver, REV, Zipato, Loxone, Somfy, Elro, Brennenstuhl, Taphome, gigaset, BTicino, intertechno2 and this list is certainly not exhaustive. In the low price segment addressing the end consumer, compatibility and interoperability is typically not present. The strangest example I came across when analysing the market is a manufacturer who has 5 systems on the market. Some of the devices have the same shape, probably have comparable hardware components and seem to operate on the same radio frequency; but they are all branded differently, and they are all incompatible.

The WISE Home of the Future

The Proof of the WISE Concept

After the description of the theoretical foundations of the WISE paradigm and the process accompanying the WISE approach in the previous chapters, this chapter presents empirical examples, which shall be considered as a proof of concept. There are three examples given, in accordance with the WISE process model presented in
Chap. 6. First we present experiments and studies carried out in lab facilities. The next example, representing the model home stage, is household 37, a real-world living environment which served as a test-bed for most of the last ten years. The final project presented, Casa Vecchia, was a longitudinal field study and represents the stage of field deployment. In the course of this ambient assisted living (AAL) project, the WISE platform was installed in more than 20 households inhabited by elderly people. The socio-psychological and technological aspects of the project were evaluated intensively over a period of four years.