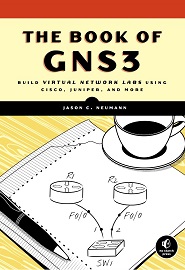 GNS3 is open source software that emulates Cisco router and switch hardware to simulate complex networks. You can use GNS3 on any computer to experiment with various router configurations, study for that next big Cisco certification, or build the ubernetwork of your wildest dreams—all without plugging in a single physical network cable.
The Book of GNS3 will teach you how to harness the powerful GNS3 software to create your own virtual networks with Cisco and Juniper devices. Hands-on tutorials throughout show you how to:

Why set up all of that expensive physical hardware before you know whether it will all work together? Learn how to build virtual networks with The Book of GNS3, and stop reconfiguring your lab every time you want to test something new.

Cisco IOS on Unix and NX-OSv

What IOU Means to GNS3

After Cisco announced it was moving away from industry-standard hardware in favor of proprietary integrated service router (ISR) hardware, the GNS3 community wondered whether the end of Dynamips and GNS3 had arrived. Without access to the technical specifiations for the new proprietary hardware, it would be impossible to create a new hypervisor required to run the latest IOS software. Eventually, the old Dynamips devices would stop getting IOS updates and become obsolete.

Cisco actually keeps IOS current for the 7200 series routers that GNS3 uses, but all other GNS3 routers stop cold at IOS release 12.4(15)T, which imposes limits on learning modern technologies such as VoIP. This is why IOU is exciting. It breathes new life into GNS3 by allowing you to integrate updated IOS technologies into your GNS3 projects—and that’s pretty cool!

One of the best reasons to integrate IOU into GNS3 is that you can use many of Cisco’s advanced switching features, which are missing from the NM-16ESW module in Dynamips (refer to Appendix C). These features allow GNS3 to step up its game and become an all-inclusive training tool for more advanced certifiations like CCIE.

With IOU, you no longer have to purchase physical switches and create a breakout switch or use funny little tricks like ISL bridging to access real switches. Using a GNS3 EtherSwitch router, it’s now possible to create a regular 802.1Q trunk link from your Dynamips switches to an IOU switch block running on your PC. IOU switches are stable, run fast, and, unlike physical switches, are completely portable, which means they can travel with you on a laptop as part of your GNS3 projects.