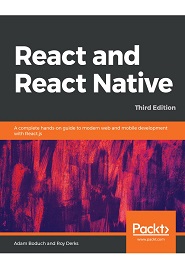 Get up to speed with React, React Native, GraphQL and Apollo for building cross-platform native apps with the help of practical examples React and React Native, Facebook’s innovative User Interface (UI) libraries, are designed to help you build robust cross-platform web and mobile applications. This updated third edition is improved and updated to cover the latest version of React. The book particularly focuses on the latest developments in the React ecosystem, such as modern Hook implementations, code splitting using lazy components and Suspense, user interface framework components using Material-UI, and Apollo. In terms of React Native, the book has been updated to version 0.62 and demonstrates how to apply native UI components for your existing mobile apps using NativeBase. You will begin by learning about the essential building blocks of React components. Next, you’ll progress to working with higher-level functionalities in application development, before putting this knowledge to use by developing user interface components for the web and for native platforms. In the concluding chapters, you’ll learn how to bring your application together with a robust data architecture. By the end of this book, you’ll be able to build React applications for the web and React Native applications for multiple mobile platforms. What you will learn
Download from free file storage