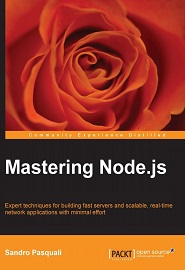 Node.js is a modern development stack focused on providing an easy way to build scalable network software. Backed by a growing number of large companies and a rapidly increasing developer base, Node is revolutionizing the way that software is being built today. Powered by Google’s V8 engine and built out of C++ modules, this is a JavaScript environment for the enterprise.
Mastering Node.js will take the reader deep into this exciting development environment. Beginning with a comprehensive breakdown of its innovative non-blocking evented design, Node’s structure is explained in detail, laying out how its blazingly fast I/O performance simplifies the creation of fast servers, scalable architectures, and responsive web applications.
Mastering Node.js takes you through a concise yet thorough tour of Node’s innovative evented non-blocking design, showing you how to build professional applications with the help of detailed examples.
Learn how to integrate your applications with Facebook and Twitter, Amazon and Google, creating social apps and programs reaching thousands of collaborators on the cloud. See how the Express and Path frameworks make the creation of professional web applications painless. Set up one, two, or an entire server cluster with just a few lines of code, ready to scale as soon as you’re ready to launch. Move data seamlessly between databases and file systems, between clients, and across network protocols, using a beautifully designed, consistent, and predictable set of tools.
Mastering Node.js contains all of the examples and explanations you’ll need to build applications in a short amount of time and at a low cost, running on a scale and speed that would have been nearly impossible just a few years ago.
What you will learn from this book

The primary argument for single-threading is that control flow is difficult in concurrent environments, and especially so when memory access or code execution order is unpredictable:

In this chapter we’ve outlined the key problems Node’s designers sought to solve, and how their solution has made the creation of easily scalable, high-concurrency networked systems easier for an open community of developers. We’ve seen how JavaScript has been given very useful new powers, how its evented model has been
extended, and how V8 can be configured to further customize the JavaScript runtime. Through examples, we’ve learned how I/O is handled by Node, how to program the
REPL, as well as how to manage inputs and outputs to the process object. The goal of demonstrating how Node allows applications to be intelligently constructed out of well-formed pieces in a principled way has begun. In the next chapter, we will delve deeper into asynchronous programming, learn how to manage more complex event chains, and develop more powerful programs using Node’s model.