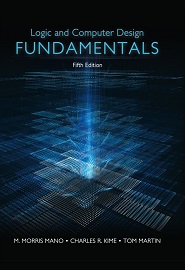 Understanding Logic and Computer Design for All Audiences
Logic and Computer Design Fundamentals is a thoroughly up-to-date text that makes logic design, digital system design, and computer design available to readers of all levels. The Fifth Edition brings this widely recognized source to modern standards by ensuring that all information is relevant and contemporary. The material focuses on industry trends and successfully bridges the gap between the much higher levels of abstraction people in the field must work with today than in the past.
Broadly covering logic and computer design, Logic and Computer Design Fundamentals is a flexibly organized source material that allows instructors to tailor its use to a wide range of audiences.

This book deals with logic circuits and digital computers. Early computers were usedfor computations with discrete numeric elements calledingers)—hence the term digital computer. The use of “digital” spread from thedigits (the Latin word for computer to logic circuits and other systems that use discrete elements of information, giving us the terms digital circuits and digital systems. The term logic is applied to circuits that operate on a set of just two elements with values True (1) and False (0). Since
computers are based on logic circuits, they operate on patterns of elements from these two-valued sets, which are used to represent, among other things, the decimal digits.
Today, the term “digital circuits” is viewed as synonymous with the term “logic circuits.”

The general-purpose digital computer is a digital system that can follow a stored sequence of instructions, called a program, that operates on data. The user can specify
and change the program or the data according to speciic needs. As a result of this lexibility, general-purpose digital computers can perform a variety of information processing tasks, ranging over a very wide spectrum of applications. This makes the digital computer a highly general and very lexible digital system. Also, due to its
generality, complexity, and widespread use, the computer provides an ideal vehicle for learning the concepts, methods, and tools of digital system design. To this end, we use the exploded pictorial diagram of a computer of the class commonly referred to as a PC (personal computer) given on the opposite page. We employ this generic computer to highlight the signiicance of the material covered and its relationship to the overall system. A bit later in this chapter, we will discuss the various major components of the generic computer and see how they relate to a block diagram commonly used to represent a computer. We then describe the concept of layers of abstraction in digital system design, which enables us to manage the complexity of designing and programming computers constructed using billions of transistors. Other wise, the remainder of the chapter focuses on the digital systems in our daily lives and introduces approaches for representing information in digital circuits and systems.

In this chapter, we will begin our study of logic and computer design by describinglogic gates and various means of representing the input/output relationships of logic circuits. In addition, we will learn the mathematical techniques for designing circuits from these gates and learn how to design cost- effective circuits. These techniques, which are fundamental to the design of almost all digital circuits, are based on Boolean algebra. One aspect of design is to avoid unnecessary circuitry and excess cost, a goal accomplished by a technique called optimization. Karnaugh maps provide a graphic method for enhancing understanding of logic design and optimization and solving small optimization problems for “ two- level” circuits. Karnaugh maps, while applicable only to simple circuits, have much in common with advanced techniques that are used to create much more complex circuits. Another design constraint for logic is propagation delay, the amount of time that it takes for a change on the input of gate to result in a change on the output. Having completed our coverage of combinational optimization, we introduce the VHDL and Verilog hardware description languages (HDLs) for combinational circuits. The role of HDLs in digital design is discussed along with one of the primarily applications of HDLs as the input to automated synthesis tools. Coverage of general concepts and modeling of combinational circuits using VHDL and Verilog follows.