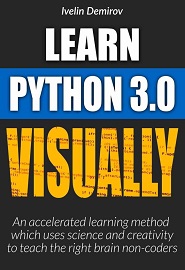 The brain processes visual information 60,000 times faster than text!!! Visual learners retain information quite differently in comparison to their left brained counterparts enabling them to benefit more from different approaches. This Book will visualize Python like never before and I can’t wait for you to try it.
Learn Python Visually is a modern breakthrough that makes learning programming more intuitive, easier, and fun. Using the most basic approach to learning that we all inherently know from childhood, “Learn Python VISUALLY” solves the comprehension problem that so many other books cannot seem to bridge. Visual learners retain information very differently than their left brained counter-parts, and thus benefit from different approaches. Full color illustrations help memory triggers as your brain never forgets an image, metaphor or schema. Illustrations can make a world of difference over strictly words on a page! If you found yourself struggling with programming, then this visual book might be your answer.
WHAT WILL I LEARN?

One of the key principles of object-oriented programming is encapsulation – hiding the details of the inner workings of the system, so that the user doesn’t need to know how it works in order to use it. The part of the program that the user interacts with is called the “interface”.
Just as the driver of a car needs tools like a steering wheel and a gas pedal to use the car’s capabilities, users of your code need to use syntax constructs called methods.

In the code above, we have created a class. A class is an entity that has specific behaviours. These behaviours take the form of methods, which are the same as the functions we have used previously, and are indented in the same way. The methods of a class are given the class (“self”) as their first parameter. The “pass” keyword tells Python that this code block does nothing.

In many cases, you want to perform the same action on a lot of very similar objects. For example, in real life, you might want to iron your socks. It wouldn’t make sense for you to consider each one individually as a unique object requiring special treatment.

In programming, this is where Python collections come in handy. A good analogy for collections is a set of lockers.

Python has two types of lockers: ones with name tags, and anonymous ones, indexed only by number.

To access items in the anonymous locker room, you can either go through all the lockers one by one, or access a specific one by an integer index. In Python, these lockers are represented by lists and tuples.

For lockers with name tags, you can either go through each locker one by one, or you can look at a specific name tag. In Python, these lockers are represented by dictionaries.

This chapter provides an overview of built-in Python collections.