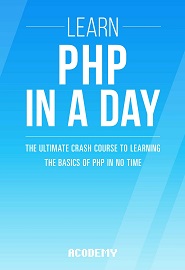 Do you want to learn PHP? In that case, you’ve come to the right place! Learning PHP is not an easy work if you don’t have the RIGHT system. Learning a programming language is not an easy work. It requires time, money and desire. You must search an academy or a teacher, achieve coordination with them, or worse, adapt your own time to their class times. You also have to pay the high fees, month to month, and what is even more annoying is this: you will probably have to go to a special place in order to practice the new programming language! You see, when it comes to learning a new programming language we are ALL in the same game, and yet most poeple don’t realize it.
I made this crash course for a reason… I made this course to give YOU a solution, to give you the RIGHT system. This crash course about PHP programming is not only going to teach you the basics of PHP in a didactic way, furthermore, you will learn PHP language WHEN you want, and more important, WHERE you want (It could even be at your home!).
I made this crash course to show you HOW you can learn PHP FASTER than you ever thought possible. I will teach YOU step by step the PHP Language extremely quickly. I will TAKE you through a step by step guide where you simply can’t get lost!
This course-book will allow you to practice, learn and deepen your knowledge of PHP as a new programming language in an entertaining, interactive, autonomous and flexible course.
Here Is A Preview Of What You’ll Learn:

There is no rule in PHP that tells you whether to use comments or not to, but it is considered good practice to use comments. If you are going to share your code with other people, you should definitely (and by definitely, we mean always!) use comments. What seems obvious to you will not be so obvious to another coder. Furthermore, even if you are not going to be sharing your code, but are instead just writing some file that you know will be for yourself, you should still make use of comments (even if you don’t comment as extensively as you would if you were sharing). Very often you will find yourself needing to revisit old code and when that happens you would want to quickly be able to remember what you were doing and why you were doing it. Although they don’t add functionality to your code, comments are just as important as the code you write, so don’t ignore them!

Each line of the array represents a key-value pair. Each line ends with a comma to indicate the next key-value pair in the array. The last entry of the array does not need to have a comma at the end of it, but most people like to include it. This convention is adopted by many people dealing with content management systems such as WordPress, Drupal and others. (The idea of leaving the comma is that you can take the entire line of key-value pairs and move it around in the array without having to worry about including a comma).