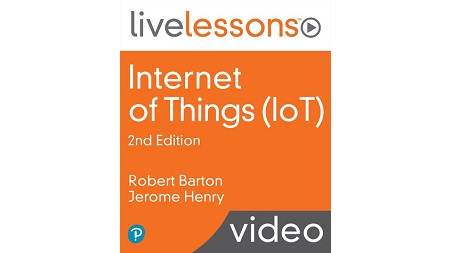 The Internet of Things (IoT) is rapidly gaining popularity worldwide and is becoming one of the most important drivers for digital transformation. It is an important topic demanded by various markets, including networking, cloud, DevOps, security, and more. Internet of Things (IoT) LiveLessons, 2nd Edition introduces you to the technical foundations of IoT, from the sensors and actuators, through secure IoT network access technologies, all the way to the core aspects of big data analytics and machine learning. It also covers the key components of an IoT network and details how various IoT cloud platforms like Azure IoT Hub and AWS IoT Core support their IoT projects.

Taught by experienced Cisco IoT experts Robert Barton and Jerome Henry, the course teaches you the basics but also the knowledge and the skills to start an IoT project that incorporates the key business drivers that make IoT an important area of technology. Internet of Things (IoT) LiveLessons, 2nd Edition is organized into 14 lessons that include several demos and many real-world deployment examples and case studies that the instructors have personally led.