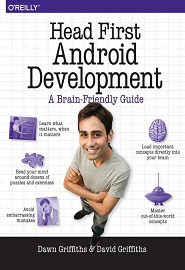 If you have an idea for a killer Android app, this book will help you build your first working application in a jiffy. You’ll learn hands-on how to structure your app, design interfaces, create a database, make your app work on various smartphones and tablets, and much more. It’s like having an experienced Android developer sitting right next to you! All you need is some Java know-how to get started.

All apps need to store data, and the main way you do that in Androidville is with a SQLite database. Why SQLite?

It’s lightweight.
Most database systems need a special database server process in order to work. SQLite doesn’t, a SQLite database is just a file. When you’re not using the database, it doesn’t use up any processor time. That’s important on a mobile device, because we don’t want to drain the battery.
We’re going to go through the basics of SQLite in this chapter.
It’s optimized for a single user.
Our app is the only thing that will talk to the database, so we shouldn’t have to identify ourselves with a username and password.
If you plan on doing a lot of database heavy lifting in your apps, we suggest you do more background reading on SQLite and SQL.
It’s stable and fast.
SQLite databases are amazingly stable. They can handle database transactions, which means if you’re updating several pieces of data and screw up, SQLite can roll the data back. Also, the code that reads and writes the data is written in optimized C code. Not only is it fast, but it also reduces the amount of processor power it needs.

Android automatically creates a folder for each app where the app’s database can be stored. When we create a database for the Starbuzz app, it will be stored in the following folder: