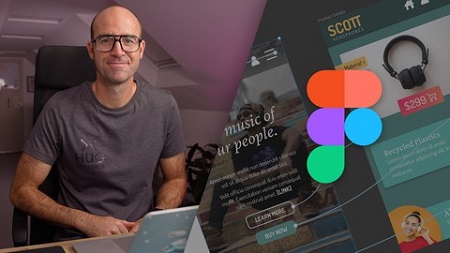 Hi there – my name is Dan Scott & welcome to Figma Essentials.

Together – you and me – are going to learn everything you need to get started working as a UX Designer using Figma.

We’ll use this UI UX design tool to create beautiful User Interfaces and engaging prototypes. Most importantly… we’ll cover the client expectations of you as a new UX designer.

This course is aimed at people new to design, new to User Experience design. Even if you’re not totally sure what UX really means, don’t worry. We’ll start right at the beginning and work our way through step by step.

You will take a project all the way through – collaborating with other team members and exporting the right files ready to hand off to your developer or software engineer.

We’ll be focusing on the software Figma but I’ll make sure to explain the techniques & terms used in the UX and how real world projects are run. You will develop a great understanding of the industry and will be able to manage your own UX projects.

I will be setting assignments through the course which will help develop your skills and enable you to create something special and unique for your own portfolio.

Alright – it’s time to upgrade yourself & go from Figma Zero to Figma Hero.