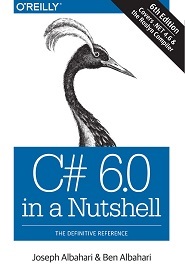 When you have a question about C# 6.0 or the .NET CLR, this bestselling guide has precisely the answers you need. Uniquely organized around concepts and use cases, this updated sixth edition includes completely revised and updated information on all the new C# 6.0 language features.
Shaped by expert reviewers, this book has all you need to stay on track with C# 6.0. It’s widely known as the definitive reference on the language.

In the first phase, a parser reads C# code and outputs syntax trees. A syntax tree is a DOM (Document Object Model) that describes source code in tree structure.

The second phase is where C#’s static binding takes place. Assembly references are read, and the compiler figures out, for instance, that “Console” refers to System.Console in mscorlib.dll. Overload resolution and type inference are a part of this, too.

The third phase produces the output assembly. If you plan to use Roslyn for code analysis or refactoring, you won’t use this functionality.

A syntax tree is a DOM for source code. The syntax tree API is completely separate from the System.Linq.Expressions API we discussed in “Expression Trees” on page 387 in Chapter 8, although the two have conceptual similarities. Both APIs can represent C# expressions in a DOM; however, a Roslyn syntax tree has the following unique features:

Conversely, the System.Linq.Expressions API has the following unique features:

Something that both APIs have in common is that syntax trees are immutable, so none of its elements can be altered once created. This means that applications such as Visual Studio and LINQPad must create a new syntax tree each time you press a key in the editor in order to update syntax highlighting and autocompletion services. This is less expensive than it sounds because the new syntax tree is able to reuse most of the elements of the old. And knowing that an object cannot change makes the API simpler to work with. It also allows for easier and faster parallelization, since multithreaded code can safely access all parts of a syntax tree without locks.