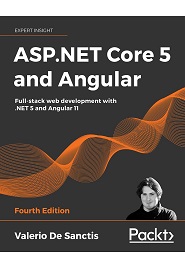 Build a simple, yet fully functional modern web application using .NET 5, Entity Framework Core, and Angular 11 Learning full-stack development calls for knowledge of both front-end and back-end web development. ASP.NET Core 5 and Angular, Fourth Edition will get you started with Angular to build robust web applications as well as the ASP.NET Core 5 and Web API Controllers to implement API calls and server-side routing in the back-end. This fully revised edition includes a side-by-side comparison of the Visual Studio Angular app versus NG App and coverage of the Angular routing module. You will learn how to build a data model with Entity Framework Core, alongside utilizing the Entity Core Fluent API and EntityTypeConfiguration class. As you progress, you will learn how to handle user input with Angular reactive forms and front-end and back-end validators for maximum effect. You will later explore the advanced debugging and unit testing features provided by xUnit.net (.NET 5) and Jasmine, as well as Karma for Angular. Further, you will dive deep into progressive web applications (PWAs), learning about their technical requirements, testing, and converting SWAs to PWAs. Finally, you will learn how to deploy apps on Windows, Linux, and Azure using IIS, Kestrel, and nginx. By the end of this book, you will be equipped with the skills you need to create, debug, and deploy efficient web applications using ASP.NET Core and Angular. What you will learn
Download from free file storage