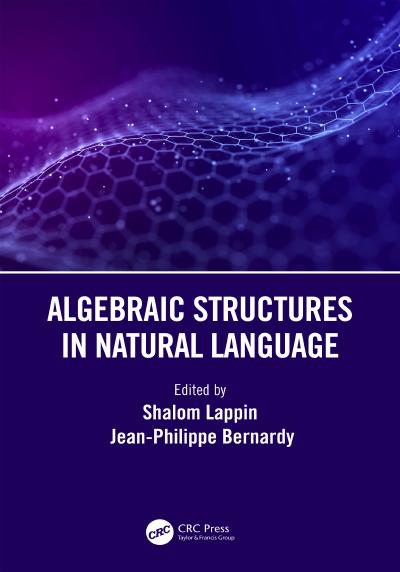 Algebraic Structures in Natural Language addresses a central problem in cognitive science concerning the learning procedures through which humans acquire and represent natural language. Until recently algebraic systems have dominated the study of natural language in formal and computational linguistics, AI, and the psychology of language, with linguistic knowledge seen as encoded in formal grammars, model theories, proof theories and other rule-driven devices. Recent work on deep learning has produced an increasingly powerful set of general learning mechanisms which do not apply rule-based algebraic models of representation. The success of deep learning in NLP has led some researchers to question the role of algebraic models in the study of human language acquisition and linguistic representation. Psychologists and cognitive scientists have also been exploring explanations of language evolution and language acquisition that rely on probabilistic methods, social interaction and information theory, rather than on formal models of grammar induction.

This book addresses the learning procedures through which humans acquire natural language, and the way in which they represent its properties. It brings together leading researchers from computational linguistics, psychology, behavioral science and mathematical linguistics to consider the significance of non-algebraic methods for the study of natural language. The text represents a wide spectrum of views, from the claim that algebraic systems are largely irrelevant to the contrary position that non-algebraic learning methods are engineering devices for efficiently identifying the patterns that underlying grammars and semantic models generate for natural language input. There are interesting and important perspectives that fall at intermediate points between these opposing approaches, and they may combine elements of both. It will appeal to researchers and advanced students in each of these fields, as well as to anyone who wants to learn more about the relationship between computational models and natural language.