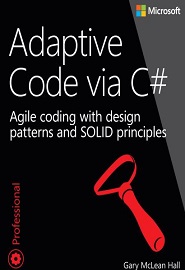 Your process may be agile, but are you building agility directly into the code base? This book teaches .NET programmers how to give code the flexibility to adapt to changing requirements and customer demands by applying cutting-edge techniques, including SOLID principles, design patterns, and other industry best practices.
Understand why composition is preferable to inheritance and how flexible the interface really can be
Gain deep knowledge of key design patterns and anti-patterns, when to apply them, and how to give their code agility
Bridge the gap between the theory behind SOLID principles, design patterns, and industry best practices by pragmatically solving real-world problems
Get code samples written in upcoming version of Microsoft Visual C#

Agileis a family of lightweight software development methods that embrace the changing requirements of customers even as the project is in progress. Agile is a reaction to the failings of more rigidly structured practices. The Agile Manifesto exemplifies the contrast. It can be found on the web at www .agilemanifesto .org.

The Agile Manifesto was signed by 17 software developers. The Agile method has grown in influence in the intervening years to the extent that experience in an Agile environment is now a common prerequisite for software development roles. Scrum is one of the most common implementations of an Agile process.

Inmy experience, the Agile approach works better than the waterfall method of software development, and I evangelize only in favor of Agile processes. The problem with the waterfall method is its rigidity. Figure 1-2 provides a representation of the process involved in a waterfall project.

Note that the output from one stage becomes the input to the next. Also note that each phase is completed before moving to the next phase. This assumes that no errors, issues, problems, or misunderstandings are discovered after a phase has completed. The arrows only point one way.

The waterfall process also assumes that there will be no changes made after a phase has completed, something that seems quite contrary to empirical and statistical evidence. Change is a natural part of life, not just of software engineering. The attitude toward change that waterfall approaches espouse is that it is expensive, undesirable, and—most damningly—avoidable. Waterfall methods assert that change can be circumnavigated by spending more time on requirements and design, so that changes simply do not occurduring subsequent phases. This is preposterous, because change will alwayshappen.

Agile responds to this fact by adopting a different approach, which welcomes change and allows everyone to adapt to any changes that occur. Although Agile—and therefore Scrum—allows for change at a process level, coding for changeis one of the hardest, yet most important, tenets of modern software development. This book is dedicated to showing you how to produce code that is Agile and adaptive enough to survive change.

Waterfall methodologies are also document-centric, generating a lot of documentation that does not directly improve the software product. Agile, on the other hand, considers working software to be the most important document of a software product. The behavior of software is, after all, dictated by its source code—not by the documents that accompany that code. Furthermore, because documentation is a separate entity from the source code, it can easily fall out of sync with software.

Scrum prescribes some metrics that provide feedback on the progress of a project and its overall health, but this differs from explicative documentation about the product. Agile, in general, favors just enough documentation to avoid being irresponsible, but it does not mandate such documentation.

Some code can certainly benefit from supporting documentation, providing that it is not written once and never read again. For this reason, living documents that are easy to use, such as wikis, are common tools in Scrum teams.

The rest of this chapter covers the most important aspects of Scrum in more depth, although the focus is not purely Scrum, but a common variant thereof. The aim of Scrum as a process is not only to iteratively refine the software product, but also to iteratively refine the development process. This encourages teams to adopt subtle changes to ensure that the process is working for them, given their unique situations and context.

After discussing the constituent elements of Scrum, this chapter examines its flaws. This chapter sets the scene for the rest of the book, which details how to implement code in such a way that it remains adaptive to the change that is embraced by the Scrum process. There is little point in having a process in which you claim to be able to handle change gracefully when the reality is that change is incredibly difficult to implementdown at a code level.

Whenever a development team claims that they follow the Scrum methodology, it is common for them to mean that they follow some variantof Scrum. Pure Scrum does not include a lot of common practices that have been taken from other Agile methods, such as Extreme Programming (XP). There are three different subcategories of Scrum that progressively veer further away from the purist implementation.

Common practices like writing unit tests first and pair-programming are not part of Scrum. However, they are useful and worthy additions to the process for many teams, and so they are considered complementary practices. When certain practices are added from other Agile methods such as XP or Kanban, the process becomes “Scrum and…”—that is: Scrum plus extra best practices that enhance, rather than detract from, the default Scrum process.

Some development teams claim to be practicing Scrum, but they omit key aspects. Their work is ordered on a backlog that is carried into iterative sprints, and they have retrospectives and daily stand-up meetings. However, they don’t estimate in story points and instead favor real-time estimates. This sort of diluted version of Scrum is termed “Scrum but…”. Although the team is aligned with Scrum in a lot of areas, they are misaligned in one or two key areas.

If a development team moves far enough away from the Scrum method, they end up doing “Scrum not…” This causes problems, particularly when team members expect an Agile methodology and the actual process in place is so different that it barely resembles Scrum at all. I find that the daily stand-up meeting is the easiest part of Scrum to adopt, but relative estimation and the positive attitude to change are much more difficult. When enough parts of the Scrum process are neglected, the process is no longer Scrum.

Scrum is just a process, and—I cannot stress this enough—it is only as effective as the people who follow the process. These people have roles and responsibilities that guide their actions.